LapCabby was born in 2003 when they built their very first laptop storage trolley.

But that was never going to be enough for LapCabby. They wanted to create something different, something packed full of smart ideas to set them apart. So, over the next few years they used their customers’ feedback to do exactly that.

By 2009 they’d added lots of clever new features to their LapCabby laptop trolley. Its launch went down a storm, and not only in the UK: over the following year LapCabby became available in Australia, France, Spain, Benelux and Scandinavia.

Since then they’ve continued to add to their range. In 2012 they launched the TabCabby, an innovative new unit designed especially to store and charge tablets. They introduced the GoCabby in 2013, and in 2015 launched the Boost+, DeskCabby and TabCabby Compacts.

LapCabby are always expanding their product range and, today, LapCabbys are available in more than 40 countries worldwide. That means, no matter where you are, you can benefit from their super smart IT solutions. 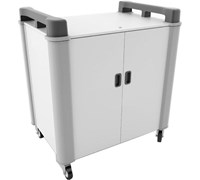